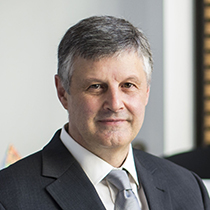 Dr Basson received his PhD in economics from Pretoria University and taught economics at
the same university from 1984 to 1990. After a few years in the banking industry, Dr Basson joined the steel industry in 1994 as Chief Economist at Iscor Ltd. in South Africa.

In 1996 he became Business Unit Manager for coated steel products and flat steel products. He later headed Strategic Initiatives at the company. Dr Basson was transferred to Europe when Iscor became a part of Mittal Steel (now ArcelorMittal) in 2004 as a General Manager responsible for Marketing Strategy and was part of the Merger & Acquisition team in Mittal steel.

From 2006 until he joined worldsteel, he was Vice-President, Commercial Co-ordination, Marketing and Trade Policy at ArcelorMittal.