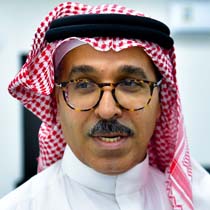 Nadhmi Al-Nasr has enjoyed a long and rewarding career leading several of the Kingdom of Saudi Arabia’s most reputable companies and projects.

Since July 2018, Al-Nasr has been at the helm of NEOM – a cornerstone of Saudi’s Vision 2030 strategy. As the Chief Executive Officer of NEOM, Al-Nasr is responsible for leading and delivering the company’s bold and ambitious program of work. Under Al-Nasr’s leadership, NEOM is set to become an economic engine for the nation and a global hub for innovation and new enterprise to shape the new future.

With an Engineering degree from King Fahad University of Petroleum & Minerals, Al-Nasr began his career at Saudi Aramco in 1978. Over many years, he held positions of increasing responsibility within the company and was lead manager on many of Aramco’s signature engineering projects.

Some of the most notable projects Al-Nasr oversaw at Aramco were the crude expansion project in the Ghawar oil field and the Shaybah Development Program. He also served as Manager of Facilities and Planning, Manager of Long-Range Planning and Managing Director of Saudi Petroleum Overseas Ltd. (SPOL).