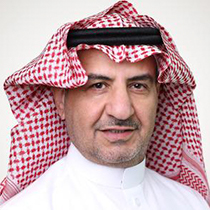 Khalid Al-Mudaifer is the Vice Minister for Mining Affairs, Ministry of Industry and Mineral Resources.
Khalid was appointed in the position in June 3, 2018 to lead the execution of the newly approved mining & mining industries development strategy under Vision 2030 to maximize the value of the Kingdom mineral resources, increase the contribution of the sector to the Kingdom economy, creating growth engine beyond oil and gas, job creation, fiscal income, and remote area development.

Mr. Al Mudaifer has 34 years of experience, including 25 years in executive leadership roles.
Khalid was the CEO of Saudi Arabian Mining company (Ma’aden) from January 2011 where he led the company as it grew into a world class integrated national mining champion serving global market where revenue grow by 20 times to nearly 4 billion US Dollar and assets grow by 3 times to 26 billion US Dollar. Prior to being the CEO, Khalid was Vice President for Phosphate and Business Development where he led the development of the Ma’aden Phosphate Company and the master planning and development of Ras Al Khair Industrial City.

Prior to joining Ma’aden, Mr. Al Mudaifer was the President of Qassim Cement Company and Vice President and Director of Finance at the Eastern Petrochemical Company (Sharq/SABIC JV).

Khalid has held a number of board memberships with Qassim Cement, Saudi Arabian Railways, Gulf International Bank, U.S.-Saudi Arabia Business Council (USSABC), International Fertilizer Association (IFA) and a number of social and government committees, boards and councils, and is currently on the Board of Ma’aden, and the Chairman of Saudi Public Transport Company (SAPTCO).

He holds a Post-Graduate Diploma in Global Business from the University of Oxford, United Kingdom, an MBA and a Bachelor’s degree in Civil Engineering from King Fahad University of Petroleum and Minerals (KFUPM), Dhahran, Saudi Arabia.